No One Cares about Connecticut Small Business

No One Cares about Connecticut Small Business

The Business Ecosystem(s) of Connecticut are Diverse and Unique: The tools to market a business do not totally align with this reality.

Recently, while performing Keyword research for another small business blog based in Connecticut, We went about the usual activities of identifying terms and searches currently being asked by the audience we are speaking to.

Those results opened our eyes to systemic pitfalls within our digital advertising platforms unique to Connecticut Businesses.

A General Lack of Interest...

No one cares about "Connecticut Small Business"

Using Google Trends to examine the popularity of a topic is an easy and basic first step with keyword research.  So input the term "Connecticut Small Business" and nothing, total flat line. So I look back a little further, as far as the google trends tool is capable of; All the way back to 2004. The results a total flatline. The initial conclusion: "Any web site that depended on traffic with this specific search term would be doomed to fail"  This however does not mean there is Zero interest in Small Business, or Connecticut Independently.

Keep in mind this article is merely an observation of very, VERY early research and general insights. By no means do we intend to challenge your personal commitment to supporting local and regional businesses.  Maybe we will change the title of this article to: "We the only people who care about Connecticut Small Business" But for the moment no one cares.

In many circumstances we would move on with out much of a thought, but something about these dismal search result was personal. We hear constantly about the importance of supporting small businesses. Over the last year the calls for support have grown more desperate and for many business owners have been living on or over the edge. Our Government has passed generous legislation in an attempt to support the economic recovery.  These "efforts" are only the most recent in well intentioned virtue signaling in support of small business.

Ok maybe no-one is trying to "shame" Connecticut; But in many ways Business Owners in Connecticut are the victims of being surrounded by 2 of the largest metropolitan areas in the world. New York City on one side, Boston on the other. ( An area of study that deserves its own college curriculum. )

Some of the basic tools to promote a business online systemically sell Connecticut Short. There are many instances but we will only talk about some the few extreme examples of how our tech overlords have overlooked CT's unique business climate.

Ever try to post to craigslist? Challenging, when your business is in Fairfield County. As a matter of fact Craigslist just combines Fairfield county with another New York region. Fairfield County isn't even listed under Connecticut. This is a market share of approximately a million people, and a region that has a considerable concentration of the worlds wealth.

Linkedin is guilty of oversight in a different way. Although a profile is configured with city/ town a member works in, They are still segmented into larger "pools" of members. This can be observed when viewing a members profile or sorting your contacts. For Connecticut Business Professionals many of us batched into the "New York City Metropolitan Area".

That might be just fine for some, but in many cases could be confusing and misrepresentative to a professional audience. Leveraging a networking is obviously a primary activity to be successful; otherwise Linkedin wouldn't exist.  i.e. If you are looking for an Real Estate Attorney in Southbury CT, it could be unclear when sorting by region and they are grouped into the "NYC Metropolitan Area" The Greater NYC area (obviously) is massive and you not realize that your best connection could be closer than you realize.

Connecticut business is also a victim of "Radial Overreach". We are blessed with the beauty and bounty's of long island sound, However this presents an obstacle unique to Service based businesses in most of Connecticut.

CT is one of a few states with not just an entire seaside border, but the only state where there is qualifying service area on the other side of the water, Long Island Sound. For instance, a 40 service mile radius for a business in Naugatuck CT could extend to Port Jefferson in Long Island. Which foe some service business would take too long and cost prohibitive to get to. While another city like Stamford CT would be within the service radius. 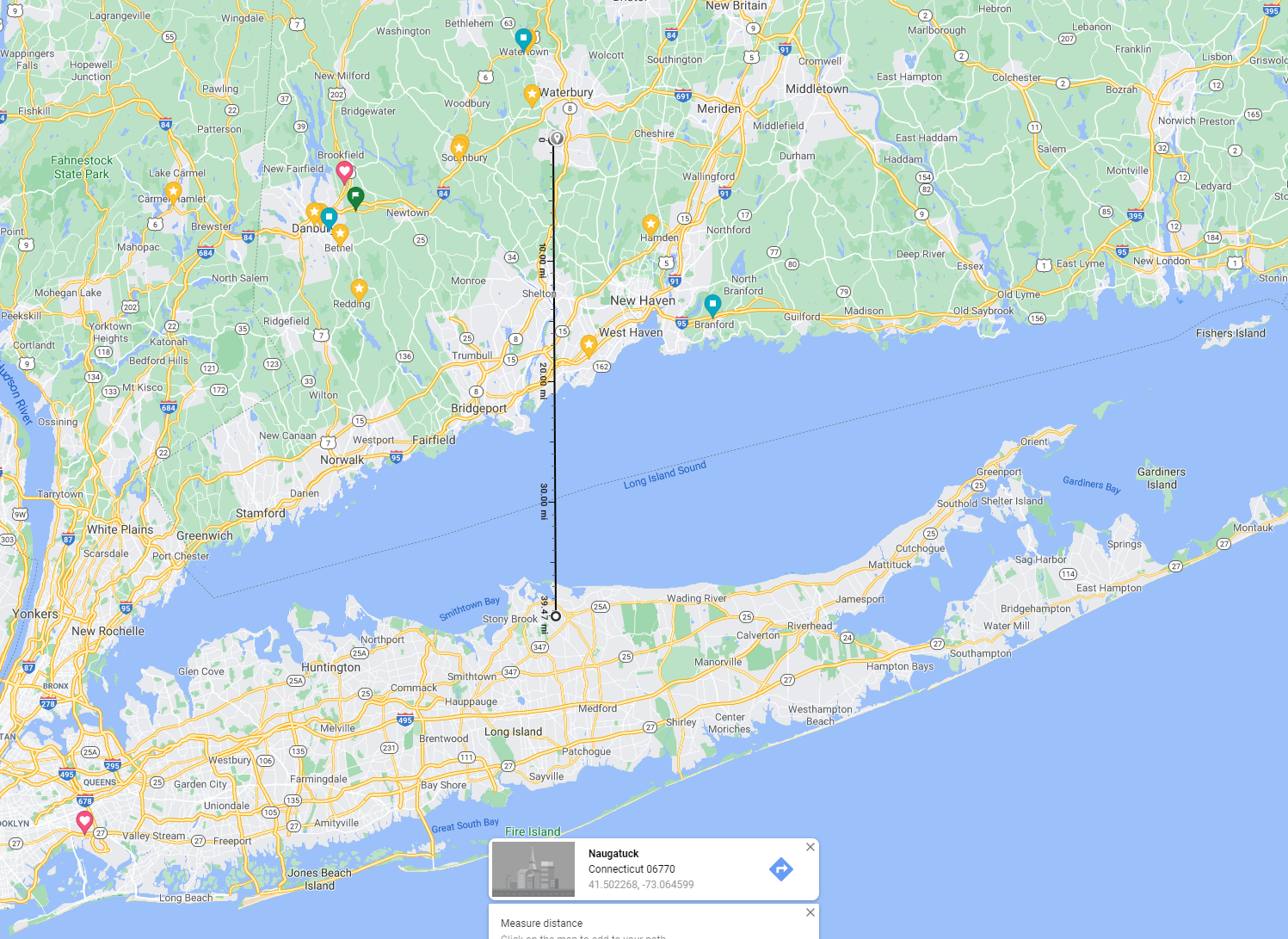 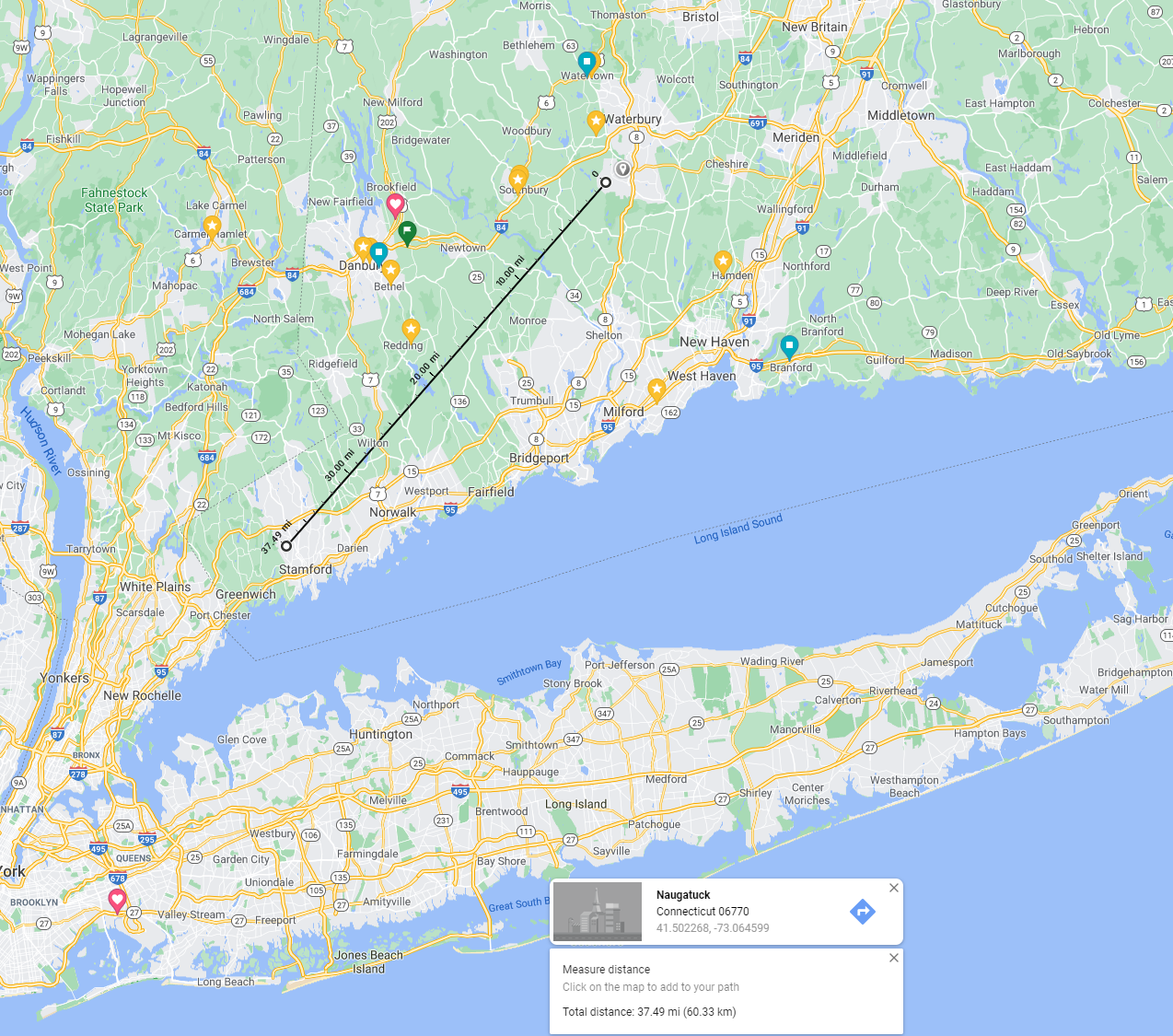 The Problem of "Radial Overreach" extends into targeting areas for digital ads, approximately 20%* of the area is water. For Businesses along Connecticut's Shoreline any radius will have approximately half the service area in the sound.

An even worse scenario is unintentionally paying for ad impressions or ad clicks on Long Island. Worse of all is having to turn down a job that responded to an ad, because its too far to service

Another considerable issue with radial overreach is businesses with strict licensing requirements, such as an insurance company, or even a general contractor. Advertising in areas without the proper disclaimers could lead some undesirable consequences, If not simple wasting ad spend in area you are not permitted to do business in.

There are of course easy fixes to prevent a worse case scenario. Towns or entire states can be excluded from targeting. See figures B & C. Specific States can be targeted or excluded getting a better focus on a campaign. 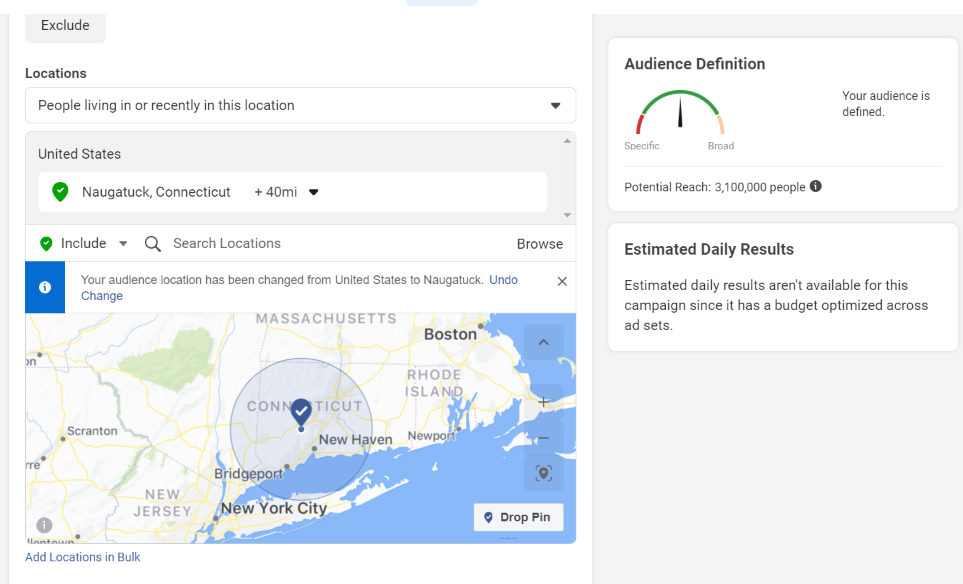 Figure B:
40 Mile Radius Excludes City's Within the Target Area to prevent ads from serving. 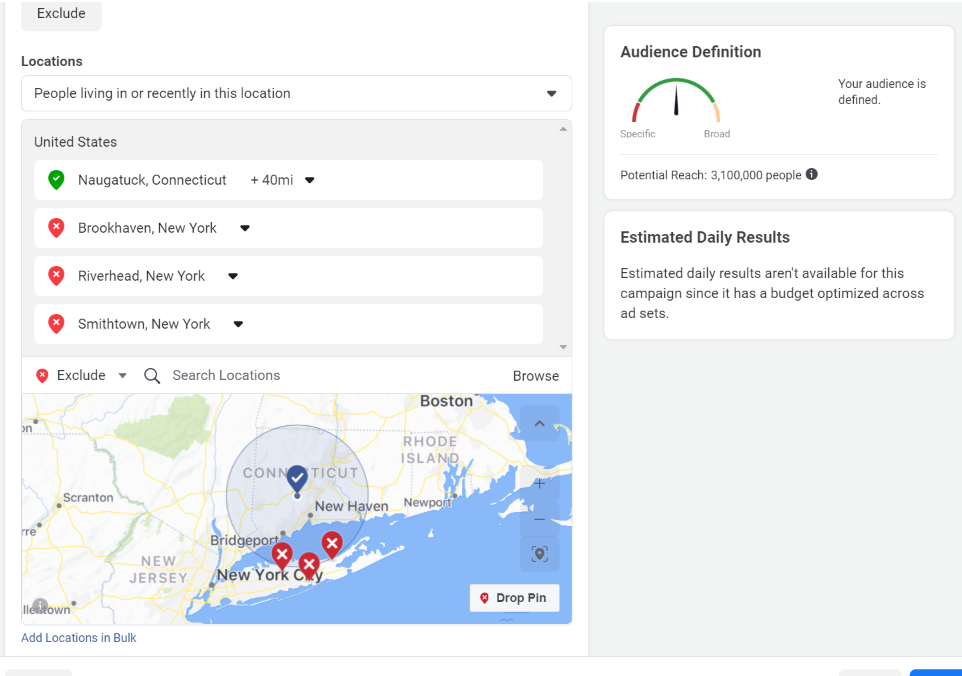 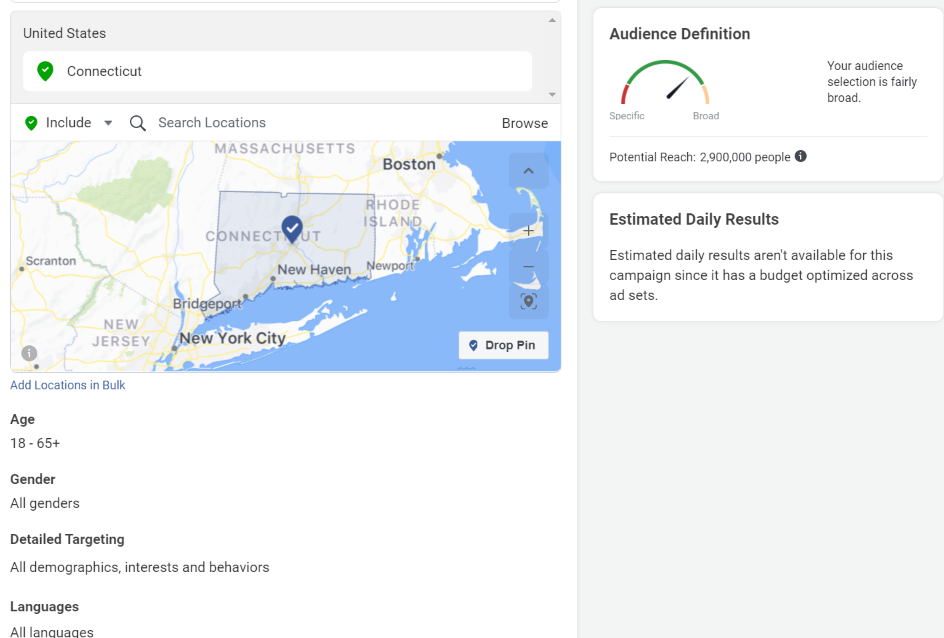 Connecticut Businesses need to be aware of the limitations of their digital tools. Take the extra time when building an audience to confirm the appropriate demographics are being targeted.

When doing keyword research you need to dig a little deeper than your own assumptions. Again everyone says they support small business, we know our communities in CT do. However according to Google, no one cares about "Small Business Connecticut"

Born and raised in Connecticut. Phil started working for the family business at 8 years old. (not an exaggeration) After Graduating from Southern Connecticut State University (early & at the top of his class also not an exaggeration) He worked as an advertising consultant for Utah Based PDC, pioneering new territory for them in the Fairfield and Westchester markets. From there Phil took that talent back on home to help grow the Family Business. "Each Business is unique, it has its own personality. I enjoy learning & illustrating what makes one business stand out among the competition." 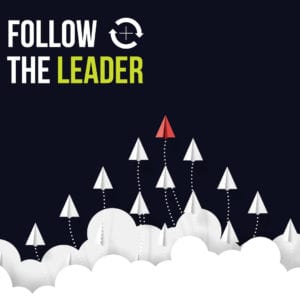